The state of blog comments in 2013

It seems like the recent trend has been toward publishing blogs without public comment sections. For one thing, people are sick of spam, Internet cranks, and the work required to have a comments section that adds to the site rather than detracting. As an example, here’s Matt Gemmell explaining why he turned off comments. At the same time, many writers are using static publishing engines or sites like Tumblr that don’t even support comments. (I know you can use third party commenting tools like Disqus, but most people don’t.)

Here’s a chart that shows the comments per post broken down by month going back to the first month that I added comment support to the blog. As you can see, the number of comments per post has dropped, even though I’m publishing fewer posts. That said, the variability has been pretty high, and the months with high averages are a result of extreme outliers — blog posts that got tons of traffic and comments. A real statistician would also share the standard deviation for each data point. 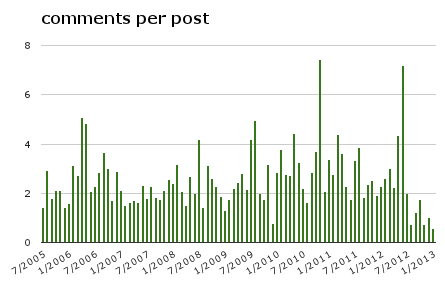 So I think that not only has publishing a blog that includes comments gone out of fashion, but commenting has as well. It’s easier to link to a post from Twitter or Google Plus and just discuss it in those venues, or respond to the author of a post on Twitter rather than in the comment section. I understand the impulse, but these venues are especially ephemeral as compared to blogs or even blog comments.

I used to be pretty reluctant to comment on blog posts on other blogs, but these days if I have something to say and I’m not going to write a post about it of my own, I generally post a comment, especially if the publisher moderates the comments effectively. I do this because I see it as a way to signal my respect for the writer. I also think it’s more social.

Those of us with blogs have also always had the option of responding to posts on other blogs with posts on our own blogs. The upside is that you hopefully deliver some readers to the blog you’re linking to. The downside is that unless the writer links back to you, your commentary is probably lost on everyone who finds the blog post that is the subject of your comments later.

Maybe it’s the Twitter effect, but I find that I crave more discussion when I post something. Looking at traffic numbers is far less interesting than having a productive or enlightening discussion. For that reason, I hate that commenting appears to be on the wane.

Farewell to the Obscure Store and Reading Room

As part of his semi-retirement, Jim Romenesko is shutting down The Obscure Store & Reading Room, one of the few remaining first generation blogs. I always felt honored to be in his blogroll back in the day.

What blogs are and aren’t good for

After the horrific shootings in Norway, James Fallows demanded an apology from the Washington Post’s Jennifer Rubin, who in the immediate aftermath of the attacks blamed al Qaeda and went on to argue that the attacks were proof that people who are argue that the war in Afghanistan should end or that we should cut defense spending are wrong based on the attacks. As we now know, the attacks were perpetrated by a lone madman who justified them based on his Christian nationalist ideology.

Today, he posted a response to some critics of his reaction to Rubin’s post. Some critics argued that he should have been just as upset at his Atlantic colleague Jeffrey Goldberg as he was at Jennifer Rubin because Goldberg also published a “blame al Qaeda” post in the immediate aftermath of the bombing in Oslo.

This brings me to my first point. Blogs are a terrible medium for reacting to breaking news. When news breaks, details are sporadic, overwrought, and often completely wrong. The conjecture based on the limited details that are available is almost always completely off base, and usually looks stupid or embarrassing within hours of the events transpiring. Rubin’s post was great proof of this. She assumed she knew who had committed the acts in Norway and then made poor arguments based on her erroneous conclusions.

Here’s Fallows’ description of why Goldberg failed to note that he’d updated his post during the day:

Jeffrey Goldberg has explained, in an update-update, that the initial lack of an “update” label was a mistake rather than a deception. He was on the road, by car in upstate New York and Vermont, and was having trouble connecting. He filed the post, erased part of it inadvertently (this has happened to me) when adding later updates, and refiled it piecemeal.

My question is, why bother publishing something in that situation at all? Will the world somehow be poorer for the lack of one more uninformed post about an unfolding tragedy? Just skip it. Goldberg’s post wasn’t as offensive as Rubin’s, but it wasn’t any more useful. The temptation to take to your blog or to the Internet to discuss breaking news is great, but my advice to anyone in these situations is to practice restraint.

The second thing blogs are bad for is gotcha journalism. The sorts of posts that Fallows is defending himself against are what blogs are known for in many quarters. Calling out other blogs for perceived inconsistencies or hypocrisies may be fun, but it’s not particularly useful, and it contributes to the perception that blogging is mainly an outlet for spiteful jerks and pointless nitpicking.

When it comes to covering current events, what blogs are good for is digging deep into a story, detail by detail, over time. For example, go read Nelson Minar’s post on the writings of Anders Breivik, the terrorist who placed the car bomb in Oslo and murdered 77 of his countrymen. The power of blogging lies in the efforts of large numbers of interested people to break down an event or story and explore every detail. Of course, that’s a lot more work than having the equivalent of a barroom conversation about something that just showed up on the television.

This week is MetaFilter‘s twelfth anniversary. To commemorate the event, Matt Haughey purchased the first domain ever linked to from MeFi and posted a stories of how members of community originally found the site and what it has meant to them.

Matt, recently featured on the cover of his local alternative newsweekly, was a member of the original blogging community. There are a few blogs still kicking that were born in 1999 (mine was technically born in 1998), and Matt was a member of that group. He was cleverer and more generous than most of us, though. Rather than creating a space to post his own thoughts, he built a site where anyone could post links and comment on them.

At the time, I thought it was a crazy idea. Someone created a mailing list that some of the early bloggers were using to discuss ideas for a blogging-related startup. It was the height of the dot com bubble and we felt we all ought to be able to capitalize on this great idea that we’d all latched onto. Little did we know at the time that Matt already had the great idea — empower the community and lovingly care for it.

Blogs so good you’d never link to them

I don’t link to Coates as often as I’m tempted to because I assume most of our readers read him already. If you don’t, you should; his blog is one of the Great Works in our little genre, and as good now as it has ever been.

It occurred to me that there a number of blogs that are so good and so popular that I can’t imagine anyone spending their time reading this one and not reading those others as well or instead.

I just assume that everyone reads kottke.org and Andrew Sullivan. I think they remain at the top of the field. I’ve had my disagreements with Andrew Sullivan over the years in matters of both substance and tone, but I still think that in terms of volume and quality, his blog is hard to touch. Jason keeps mining interesting stuff on the Internet. Reading his blog will make you smarter.

Ta-Nahesi Coates’ blog is brilliantly written and incredibly thoughtful. James Fallows produces perhaps the most consistently interesting blog around on a day to day basis. There’s never a dud.

At this point, I assume that anyone who cares about politics and more importantly, policy, is reading Ezra Klein. There are a lot of good political blogs out there, and even some great ones, but his outshines them all. Matthew Yglesias‘ blog is worth reading daily for reasons that I’ll write about in a separate post at some point. Basically, he’s exploring some really interesting ideas that he’s fleshing out over an extended period of time that don’t fall neatly across established political lines.

Anyone who cares about Apple is, I assume, reading Daring Fireball and Asymco.

In the “not a blog” category, I read everything that Chris Adams shares in Google Reader. The blog posts he shares are as consistently interesting as any one blog I read.

Which blogs do you read that you assume everyone else reads as well?

I don’t want to see us descend into a nation of bloggers.

The ugly side of aggregation

Michael Wolff’s new publication, Newser, is probably the best example yet that aggregation-oriented startups have taken the wrong lessons from weblogs. Andrew Leonard reviews the site:

But what takes Newser beyond countless other similar sites is a truly precious degree of shamelessness. All of the above stories — even the slide shows — are repackaged, rewritten and abbreviated versions of content originated by other publications. When your pursuit of traffic leads you to the point of ripping off a Fox News Lindsay Lohan/Britney slide show, you have stooped so low you can’t even reach up to the lowest common denominator.

Some people never forget a face — I never forget a name, and one thing I appreciate is that Andrew Leonard doesn’t either. In his blog post he makes sure to remind people who may not remember that Michael Wolff is the same guy who tried to write a book damning the insanity of the dot com era and wound up exposing his own sleaziness instead.

tawawa.org has done some research into early blogs, making the argument that attributing the sources for links was the spark that ignited the blogging phenomenon:

The blogosphere arose on 24 April 1998. On that day Steve Bogart made the announcement that he was adopting Jorn Barger’s recent practice of attributing the source of the links he was posting to his weblog. Barger’s innovation of crediting the origin of his outbound pointers, adopted by Bogart first and by many others afterwards, infused an earlier, mostly dormant network with a dynamic it had previously lacked, turning the aspiration of a self-aware social medium into the reality of such a medium.

I’m very glad all of the old blog content is archived so that this sort of analysis can be performed. Both Jorn and Steve are still at it, on blogs and on Twitter.

Links from May 31st

The wages of blogging

Good things happen to those who blog (well). Marginal Revolution’s Alex Tabarrok and fivethirtyeight.com’s Nate Silver will be panel members at TED 2009. One-time hobbyist fashion photographer The Sartorialist has gotten a major book deal. Obviously blogging is this big huge industry now full of professional writers, journalists, and celebrities, but the people who started out doing this for love and made it big will always have a special place in my heart. The people who publish their thoughts and remain relatively unknown do as well.