Ignite Raleigh: How I prepared 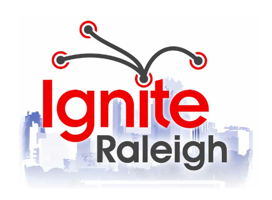 Last night I gave a talk at Ignite Raleigh. Public speaking is not something I’m particularly comfortable with, but I thought I’d give a shot. I’m writing up a few blog posts to go back and read next time I have a public speaking gig, and that might help other Ignite presenters as well.

First, a word about the Ignite format. Ignite features a number of speakers, all of whom are given five minutes to speak. They also prepare a slide show of 20 slides, which advance automatically every 15 seconds. When you’re slide show’s over, you’re done. Last night we had 15 speakers, and none went over.

So the key challenge is being able to tailor your speech to come as close as possible to the 5 minutes you’re given, without going over. The secondary challenge is making slides that assist you in giving a good talk — without overwhelming or distracting you.

For the first week after I agreed to participate, I bounced around ideas for speaking topics. I came up with and abandoned four or five ideas before settling on my final topic, which was the robustness principle. I was very happy with the topic I chose.

I sat down Saturday morning and wrote out my full talk, and then read it aloud to my wife. It was boring. Really boring. It read like a Wikipedia article. However, it did outline exactly what I wanted to talk about.

So I sat back down and rewrote the whole thing. But first, I needed to figure out how long the speech should be in terms of word count, which is how writers tend to think. After a little research, I saw that the consensus on the Internet seemed to be that you should speak at a pace of roughly 100 words per minute, so I shot for a 500 word talk. The second draft was much, much better than the first. I trimmed out a lot of the trivia that didn’t contribute directly to my point, and I rearranged it to make sure it would grab people at the beginning and help them understand what, exactly, they were going to learn.

I read the second draft to my wife, and she liked it much better. Unfortunately, when I read it aloud, it only took me about two and a half of three minutes. So then I went back and added some stuff back in.

At that point, the bones of my speech were there. I knew what I wanted to say. What I didn’t know was how best to create the set myself up to give a good speech.

I knew I wasn’t going to walk up on stage with the full text of the speech in hand. If you do that, you wind up reading the speech and it sounds awful.

I knew I wasn’t going to put a lot of text on my slides — it’s easy to find yourself reading the slides rather than addressing the audience. Plus I hadn’t figured out how to set up Keynote to present the slides Ignite-style, and I was really worried about not getting to practice enough in “game conditions.”

I wound up giving the speech without notes, about which more later. At that time, I assumed I’d trim down the speech to a list of terse notes that I could refer to.

I wrote the speech on Saturday and started working on my slides on Sunday, because they had a Monday due date. Here’s another thing I didn’t know: making a decent presentation takes forever.

I made some slides on Sunday, but I found it tough to getting inspired. I think I finished about five slides that day, and I also practiced my speech a few times.

Monday was slides day. I decided that the best approach was to create slides that provided supplemental information about what I was talking about, as opposed to driving the presentation. In some areas I was talking about things that were on the slides, but in many others the slides had little to do with what I might be saying at that moment. Because I didn’t know if I’d be able to practice in the Ignite format, I didn’t want to have to worry about my talk falling apart if I got out of sync with the slides.

By about midnight on Monday I had finished the presentation and emailed it in. I didn’t think that the slides were great, and they outperformed my expectations when I gave the talk. The audience reacted positively to the slides, and one slide I put in as a joke did get laughs without any support from me. That was a positive.

Once I’d emailed in the slides, I practiced a few more times before bed. I also pared down my presentation til it was just notes. At one point, I added back in the specific phrases I wanted to use when I moved from one point of the talk to the next, but in the end I tossed out the notes completely.

It occurred to me on Tuesday, the day before the show, that if I couldn’t practice in more realistic conditions, I was doomed. I still hadn’t figured out how to automatically advance slides in Keynote. After putting in more research, I finally figured it out, and so Tuesday night I was able to hook the laptop up to my TV and give the speech while watching the slide show.

After getting things rigged up, I practiced the speech a bunch of times with the slides, and got it down pretty well. When I started practicing with the timed slides, I wished I could restructure the presentation a bit, but it was already too late. So I just accepted the presentation as it was as a constraint and tried to work within it. My main worry was that I’d left only 45 seconds (three slides) for my conclusion — so I decided that when the seventeenth slide came up, I’d start on the home stretch either way.

At this point, I was speaking from my notes. On Wednesday morning (the day of the show), I practiced my speech in the shower without notes, and felt like I could get by without them. I rehearsed the speech once for my coworkers with notes, and it didn’t go particularly well.

I took the afternoon off on Wednesday to do some more rehearsing, and practiced all afternoon without any notes, just going from the presentation, and by the time I was ready to leave for the show, I felt like I had things down pretty well. I had gotten good at managing the time — filling in when I got ahead or cutting things when I got behind — and I had a good relationship with the slides in that I knew what my cues were to move from one topic to the next.

I also had the key pieces of the presentation down pat. I had a few sentences and phrases that I knew I wanted to use, and I could employ them with precision. I stopped rehearsing when I felt like I wasn’t getting any better. So I ate a little bit and headed out to the show.

The next installment in this series is Show night. You can also skip ahead and read my lessons learned post.

Ruby vs Python, the final word