What the Church of Scientology denies

For those of you too lazy to read all ten billion words of Lawrence Wright’s New Yorker article on Paul Haggis and Scientology, here’s a list of the things the Church of Scientology denies:

He staffed the ships with volunteers, many of them teen-agers, who called themselves the Sea Organization. Hubbard and his followers cruised the Mediterranean searching for loot he had stored in previous lifetimes. (The church denies this.)

Scientology defectors are full of tales of forcible family separations, which the church almost uniformly denies.

Hawkins told me that if a Sea Org member sought outside help he would be punished, either by being declared a Suppressive Person or by being sent off to do manual labor, as Hawkins was made to do after Miscavige beat him. The church denies that Hawkins was mistreated …

… he presumed that the church had obtained its information from the declarations that members sometimes provide after auditing. Such confessions are supposed to be confidential. Scientology denies that it obtained the information this way, and Davis produced an affidavit, signed by Scobee, in which she admits to having liaisons.

The church denies that it pressures members to terminate pregnancies.

The church denies this characterization and “vigorously objects to the suggestion that Church funds inure to the private benefit of Mr. Miscavige.”

He worked for fourteen months on the renovation of the Freewinds, the only ship left in Scientology’s fleet; he also says that he installed bars over the doors of the Hole, at the Gold Base, shortly after Rathbun escaped. (The church denies this.)

Cruise brought in two motorcycles to be painted, a Triumph and a Honda Rune; the Honda had been given to him by Spielberg after the filming of “War of the Worlds.” “The Honda already had a custom paint job by the set designer,” Brousseau recalls. Each motorcycle had to be taken apart completely, and all the parts nickel-plated, before it was painted. (The church denies Brousseau’s account.)

How Steve Jobs brings hope to the world

Andy Crouch, A World Without Jobs:

As remarkable as Steve Jobs is in countless ways—as a designer, an innovator, a (ruthless and demanding) leader—his most singular quality has been his ability to articulate a perfectly secular form of hope. Nothing exemplifies that ability more than Apple’s early logo, which slapped a rainbow on the very archetype of human fallenness and failure—the bitten fruit—and made it a sign of promise and progress.

A thought provoking piece on Steve Jobs and finding hope in a secular world.

GQ has obtained one of the most astounding things I’ve seen — a series of covers from daily Pentagon intelligence reports prepared for the President during the Bush administration. Each includes a photo with some military theme and a selected Bible verse. Here’s one example: 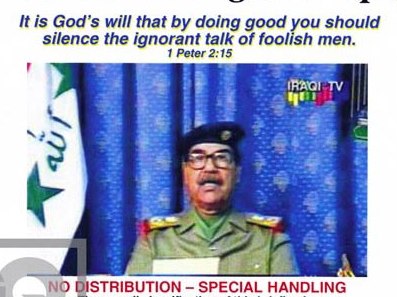 It’s impossible to escape the conclusion that the Pentagon (under Donald Rumsfeld’s guidance) was angling to play into President Bush’s well-documented belief that he was on a mission from God to take on evildoers. No matter how much we learn about the Bush administration, we always find out it was worse than it appeared.

These links are for the past three days.

Google developer Cedric Beaust argues that treating orthodox Test Driven Development as some kind of panacea is a mistake, a position that I find it difficult to argue with. In fact, I find myself rejecting nearly all dogmatic software development philosophies. I like to read about them, but in the end I just steal the parts that work for me and do what seems to make the most sense.

My dirty secret: I almost never write a test, watch it fail, and then fill in the code necessary to make the test pass. That seems gratuitous to me.