More on the victimization of the rich

Yesterday, I linked to a Malcolm Gladwell piece that included the following sentences:

The rich have gone from being grateful for what they have to pushing for everything they can get. They have mastered the arts of whining and predation, without regard to logic or shame.

It put me on the lookout for other examples of rich people whining about being victimized, and reminded me immediately of this week’s Economist cover story — provocatively titled “Hunting the rich.” Here’s how it starts:

THE horns have sounded and the hounds are baying. Across the developed world the hunt for more taxes from the wealthy is on. 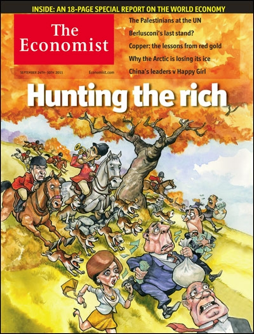 This is important because the basic demographic to which The Economist appeals is rich people. (Before you argue with me, purchase a dead trees issue and check out the ads.) Clearly this is a message that they are confident will resonate. Fortunately, being The Economist, they are willing to engage with actual facts:

First, the West’s deficits should not be closed by spending cuts alone. Public spending should certainly take the brunt: there is plenty of scope to slim inefficient Leviathan, and studies of past deficit-cutting programmes suggest they work best when cuts predominate. Britain’s four-to-one ratio is about right. But, as that ratio implies, experience also argues that higher taxes should be part of the mix. In America the tax take is historically low after years of rate reductions. There, and elsewhere, tax rises need to bear some of the burden.

Second, there is a political argument for raising this new revenue from the rich. Spending cuts fall disproportionately on the less well-off; and, even before the crunch, median incomes were stagnating. Meanwhile, globalisation has been rewarding winners ever more generously. Voters’ support for ongoing austerity depends on a disproportionate share of any new revenue coming from the wealthy.

This is basically the argument I see most progressives make regarding taxes. Tax revenue has been going down for years and the gap between rich and poor has been increasing for years. Clearly US economic policy has disproportionately benefitted rich people the most, and they can best afford the tax increase. The article then goes on to endorse an Obama-like tax plan. Hunting the rich, indeed.

The wealth gap and the NBA lockout

Managing the complexity of your software development process