The sleaziness of wireless carriers

David Pogue has blown the whistle on unethical billing practices at wireless carriers before, and he does it again today, this time calling them out for making it difficult for customers to avoid getting tagged with excess data charges every month. Here’s a quote from an unnamed Verizon employee:

The phone is designed in such a way that you can almost never avoid getting $1.99 charge on the bill. Around the OK button on a typical flip phone are the up, down, left, right arrows. If you open the flip and accidentally press the up arrow key, you see that the phone starts to connect to the web. So you hit END right away. Well, too late. You will be charged $1.99 for that 0.02 kilobytes of data. NOT COOL. I’ve had phones for years, and I sometimes do that mistake to this day, as I’m sure you have. Legal, yes; ethical, NO.

Brough Turner says the congestion problems on AT&T’s network may be the result of misconfigured routers:

Recently I was talking with a friend whose company continuously operates (and monitors) multiple 3G data links on the Verizon Wireless, AT&T Wireless and Sprint PCS networks. His data shows periods when the round trip time for http requests goes over 8 seconds, on the AT&T Wireless network only! I don’t have a copy of his data that I can examine in detail, but when combined with David Reeds report, it certainly appears AT&T Wireless has configuration problems. If you read on you’ll see this may not be the result of gross stupidity, but someone at AT&T Wireless should be a little embarrassed.

The argument he makes is really interesting. The limiting factor for AT&T’s network is over the air capacity. TCP stacks handle congestion by throttling back their traffic when they detect packet loss. If AT&T’s network that backs up the over the air network does not induce sufficient packet loss, then devices will not handle congestion properly and further oversaturate the network, thus eroding the network’s capacity to degrade gracefully. I have no idea if this is the case, but it certainly seems possible.

Don’t miss the comments on the post, they’re really interesting as well.

The iPhone app store at 5 months

As long as I’m blogging about mobile technology, here’s a snapshot of what’s selling in the iPhone app store after five months. I’ve downloaded a number of apps, paid for just a couple, and almost never use any of them. I use the phone for voice, texting, email, and to a lesser extent, Twitter. Every once in awhile I play dice poker if I’m bored.

I was more impressed by Amazon.com’s iPhone application before I learned how it works. Even so, pretty cool.

The state of Android

Patrick Mueller has written a pretty good developer-centric overview of where Android stands today. I’m eager to see Android make it onto more handsets, and for the UI to pick up more polish. I find that over time, user interface polish takes on more and more importance for me, and the iPhone’s nicer interface insures that I’ll be sticking with it until Google makes some pretty major improvements to Android, and until they find a hardware partner who designs devices as well as Apple does.

Text messaging as a marketing tool

Farhad Manjoo writes about the effectiveness of text messaging in political campaigning:

Political scientists have run dozens of such studies during the past few years, and the work has led to what you might call the central tenet of voter mobilization: Personal appeals work better than impersonal ones. Having campaign volunteers visit voters door-to-door is the “gold standard” of voter mobilization efforts, Green and Gerber write. On average, the tactic produces one vote for every 14 people contacted. The next-most-effective way to reach voters is to have live, human volunteers call them on the phone to chat: This tactic produces one new vote for every 38 people contacted. Other efforts are nearly worthless. Paying human telemarketers to call voters produces one vote for every 180 people contacted. Sending people nonpartisan get-out-the-vote mailers will yield one vote per 200 contacts. (A partisan mailer is even less effective.)

These findings create an obvious difficulty for campaigns: It’s expensive and time-consuming to run the kind of personal mobilization efforts that science shows work best. Green and Gerber estimate that a door-canvassing operation costs $16 per hour, with six voters contacted each hour; if you convince one of every 14 voters you canvass, you’re paying $29 for each new voter. A volunteer phone bank operation will run you even more—$38 per acquired voter. This is the wondrous thing about text-messaging: Studies show that text-based get-out-the-vote appeals win one voter for every 25 people contacted. That’s nearly as effective as door-canvassing, but it’s much, much cheaper. Text messages cost about 6 cents per contact—only $1.50 per new voter.

We can assume the calculation is similar when selling things other than political candidates as well.

The good and bad of texting

Louis Menand has written an article damning texting as the nadir of human communication. As a late but fervent adopter of texting, I’ll argue to the contrary.

One of the biggest complaints about texting is that entering text using the numeric keypad on a mobile phone is incredibly tedious and painful. On this note, I agree. I never texted until I bought an iPhone. Here’s the thing — cell phones that provide only a numeric keypad are an endangered species. Blackberry and iPhone are the harbingers of the future in this regard. With a real keyboard, texting really isn’t too painful, and there’s less incentive to abbreviate everything.

Texting fits into a niche that was previously unoccupied. Here are the three specific advantages of texting: texts are delivered in realtime, brief, and easy to ignore. Here’s the sentence that shows that Menand doesn’t get it:

Usually, if you can text a person you can much more quickly and efficiently call that person.

If you’re sitting in a meeting, or eating at a restaurant, or even standing in line at the post office, talking on your phone is impossible at worst or rude at best. I can text anyone with the knowledge that doing so will not interrupt whatever more important business they’re taking care of. If they have time, they can look down at their phone and read the text immediately. If they’re busy, or even in the middle of an interesting conversation, they can save looking at the text for later.

Yesterday I was in a meeting and couldn’t pick up a call. I was able to text the person who left the voice mail immediately and ask them if the call was urgent.

Brevity is a huge advantage in a certain kind of relationship. The 140 character limit can certainly be a relief to text someone when you’re short on time and you know more would be expected of you if you contacted the person via email or called them. The tedium of entering text and the forced limit on size demands that texts get down to business. I know many people who prefer to text for this reason alone.

And finally, immediacy is what separates texting from email. Most people (other than Blackberry users) don’t get email on their mobile phone as soon as it’s sent. So if you need a response right away and the recipient is available to provide it, text messaging works like a charm.

People should learn to love text messaging, because it’s with us to stay. There’s no other form of communication that offers exactly the same set of strengths, and I expect it to grow as more people outside the texting generation recognize that.

Given Apple’s developer-hostile practices when it comes to the iPhone and the iTunes App Store, it’s becoming increasingly important for other mobile phone providers to build handsets that are more competitive with the iPhone. It looks like the best hope on that front is Google’s Android, so I was interested to read Tom Conrad’s thoughts on the platform.

Conrad is the head tech guy for Pandora, the Internet radio company whose client is one of the most compelling iPhone applications.

He lists as plusses Google and the Android team, and as minuses, the fact that differences in hardware will make things rough for developers, and that carriers (not Google) will be the ultimate arbiters of how open the platform is.

I think many people who aren’t iPhone owners might see it as odd that people feel so strongly that Apple needs competition in the handset market. The iPhone is a relatively small player in terms of market share. The thing is, though, I don’t think there are many iPhone owners who would trade their phone for any other handset on the market. Blackberry is nice in some ways, but it’s not an iPhone. (Nor is iPhone a Blackberry.) The market is crying out for more decent substitutes for both. 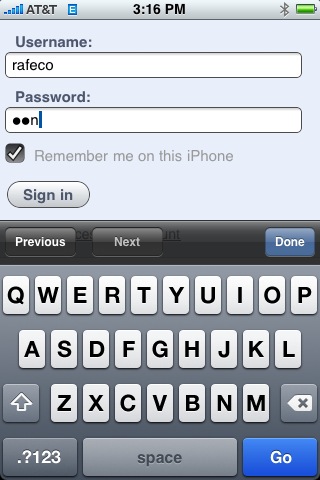 I didn’t have a huge amount of evidence to support that theory, just my own preconceived notions and the case of my Blackberry-dependent friend who tried to switch to the iPhone and wound up returning it and getting a newer Blackberry instead.

It’ll be interesting to see if the upcoming features for the iPhone make it worth it for Blackberry users to ditch their mad Blackberry skills and start over.